The Teufelhof Basel occupies two interconnected historic houses in Basel Old Town and offers two hotels, two restaurants (one of which has been awarded a Michelin star), a theatre, a wine shop, a café, a bar and the archaeological cellar. Culture is also found throughout the establishment. It is worth noting of the Teufelhof that its creators did not come directly from the hospitality industry.

Having decided that theatre should not be understood as a cultural island, but as an element that participates actively in the life of the city, Dominique Thommy and his partner Albert leVice built the first mobile small theatre in 1967: ‘Das schiefe Theater’ was a special construction on wheels, which unfolded into an enclosed, sound-insulated theatre hall, accommodated an audience of 120 and had a fully equipped stage. ‘Das schiefe Theater’ appeared in places where theatre was not expected at that time: in the midst of everyday life in city centres. Monica and Dominique Thommy-Kneschaurek met during this intense period. ‘Das schiefe Theater’ had its premiere in Basel in October 1968. In the following seven years, they went all over Europe with leVice and his wife and played to more than 90,000 audience members in more than 1,100 performances. After the intensive period of travelling with ‘Das schiefe Theater’, the couple wanted to settle down.

The question for them was how to run a theatre at a permanent site and design a programme that depended neither on subsidies nor on superficial crowd-pleasers. They found the solution by coming up with the idea of self-subsidising the theatre by operating it alongside a café and restaurant business. They started out by running the Kaffee zum Teufel in Basel only to then create something bigger and grander 14 years later – the Kultur und Gasthaus der Teufelhof.

They pursued their goal with loving obstinacy, despite objections that lasted over six years and were resolved in their favour in front of a federal court. And so the Teufelhof became what it is today.

The main objective at the Kultur und Gasthaus der Teufelhof Basel is to pique curiosity and to be a broker between personalities and their quality products as well as the guests. Both in the area of gastronomy and also in that of theatre and the visual arts. The theatre visitor should be made aware of the dining culture and the visual arts, the gourmets made curious about the theatre work as well as the art rooms and exhibitions, while admirers of art installations were taught to appreciate the arts of cooking and stage.

What’s more, the dining and hotel operations continue to finance the art. This makes the Teufelhof unique. On 1 January 2009, the Teufelhof passed into new ownership. The Thommys sold the hotel to two former employees, Nathalie Reinhardt and Raphael Wyniger. Today they rund the Teufelhof, bring in new ideas and concepts without forgetting the tradition.

The Teufelhof Basel is awarded the «ibex fairstay» label for sustainability - with gold at the first attempt.

Redesign of 7 art rooms in January

31st Mai 2018: Opening of the Cocktaileria-Gelateria at the Styx Bar - www.styxbar.ch

The Teufelhof Basel took over the Ryago AG in Basel in March 2018 in terms of a succession regulation. www.ryago.ch

During the winter months at the restaurant Ufer7 : Opening of the «Rheinchalet« - Fondue with Rhine view, www.rheinchalet.ch

Opening of the pop-up bar «Styx» at Unterer Rheingasse 9, www.styxbar.ch

Opening of the new event location «Opus» in the historic part of the building.

Opening of the new event location «Atrium» at Gemsberg 8, as well as new office premisis.

Raphael Wyniger is elected as the (first) "Hotelier of the year" of switzerland www.hotelierdesjahres.ch

On 28th April the Teufelhof Basel celebrates its 25-years jubilee.

Numerous renovations around the Teufelhof.

The Teufelhof Bar is renovated and get a new concept.

The theatre in the Teufelhof gets a new leadership. Katharina Martens and Roland Suter take over the lead from Dominique Thommy. They continue with the tradition of the programming. In this context the theatre is softly rebuilt.

On 6th May the Teufelhof Basel is voted as the most friendly shop in the City of Basel. This prize, which makes us extremly happy and proud, is awarded from the Basler Zeitung based on a pull.

On the occasion of the 20-years jubilee of the Teufelhof the memory book «Der Teufelhof Basel» is published on 28th April. It is realised by Jürg Seiberth and Fredy Heller.

As the first project of Raphael Wyniger and Nathalie Reinhardt the new meeting and banquet room «Shine & Dine» is opened.

Raphael Wyniger has his break through regarding the question of financing the Teufelhof Basel. A notable bank agrees to grant a loan for the purchase of the Teufelhof.

Raphael Wyniger works successfully as project leader in the special field tourism for the city of Basel on the occasion of the Euro 2008.

On 30th October the sale and purchase agreements are signed by both parties to the contracts.

Monica and Dominique Thommy ask Raphael Wyniger and Nathalie Reinhardt if they would like to take over the Teufelhof.

Dominique Thommy assumes control of the theatre in the Teufelhof.

Raphael Wyniger starts to work at Basel Tourismus. After a short while he becomes vice director.

Fredy Heller, head of the theatre, receives the «Basler Kulturpreis».

Thommys receive for their «life's work Teufelhof» the «Milestone 2001», the Swiss tourism award.

Dominique Thommy starts his business as lyricist at the Nadelberg 47 for about two years.

The magazine BILANZ puts the Teufelhof on the first place in its ranking «Three stars hotels of Switzerland».

A satire open in honor of the 25 years anniversary of the theater takes place in the Teufelhof.

Raphael Wyniger starts to work in the service as a trainee of the hotel management school SHL in Lucerne. He stays one year.

Relocation and opening of the shop «falstaff» in the cellar of the Gallery Hotel.

After 9 monthes of reconstruction period (the architect Hans Pösinger has again the lead) the Gallery Hotel is opened with 24 rooms.

Thommys buy the adjoining building of the Teufelhof (former Stift St. Leonhard) with building law from the city of Basel; the prosecution moves out.

The gastronomy guide «Michelin» awards the kitchen of the Teufelhof one star.

Opening of the wine and speciality shop at the Heuberg 26.

In October the first edition of the company newspaper DAS BLATT is released. 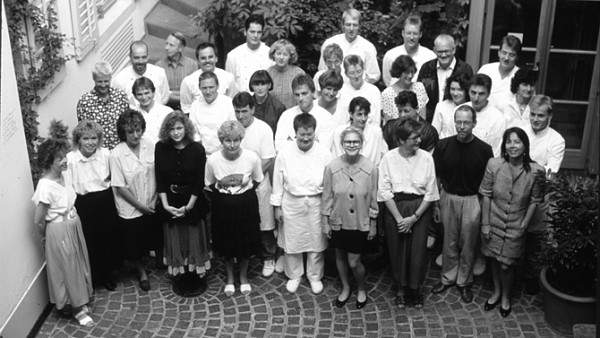 Vernissage of the for the first time designed art rooms in the Art Hotel. 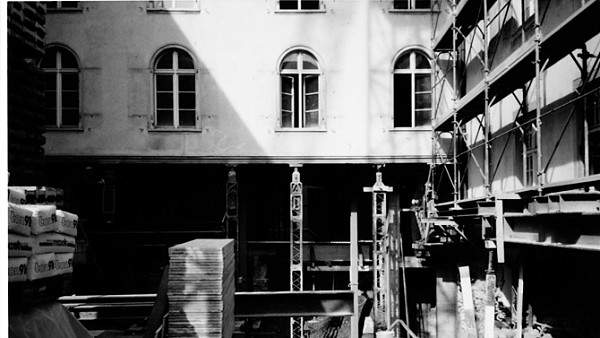 On 28th April the Teufelhof Basel with eight hotel rooms, two restaurants, one café, a bar and two theatres is opened with a debut performance of «Abendfrieden spezial» from the cabaret artist Mr. Joachim Rittmeyer. 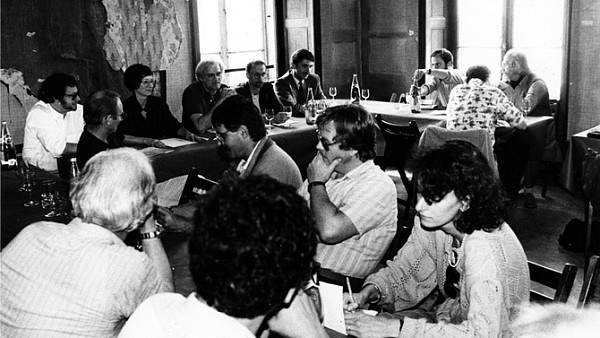 Two rulings of the Federal Court in favor of Thommys. In series (after a clarification of the building licence durin 2361 days) the modification of the Truchsesser Hof to the Teufelhof in only 9 months. The architect Hans Pösinger has the lead.

The idea Truchsesser Hof/Teufelhof gets concretised: the took over of the building from the BBG Basler Baugesellschaft AG.

Objections against the project until 1988. Dr. Alex Fischer represent Thommys in legal terms.

Idea of the extended project of the «Theater/Café zum Teufel», amongst others in the Heckdorn villa.

Nathalie Reinhardt has been borned in Basel on 19th May.

Raphael Wyniger has been borned in Solothurn on 20th July.

Start of the theatre «Schiefes Theater», premiere in Basel.
Afterwards tour through whole Europe.
Last performance on the Barfüsserplatz in Basel in 1974.

Monica Kneschaurek has been borned in Lugano on 8th November.

Dominique Thommy has been borned in Basel on 28th September.

The doctor Dr. Peter-Hans Hosch buys the Truchsesser Hof from the family Adam

Abbey, Stift St. Leonhard at the Leonhardsgraben; the beginnings (from 1200/1300 on) are largely obscure.